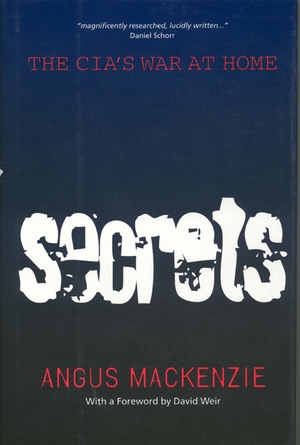 Secrets The CIA's War at Home

This eye-opening exposé, the result of fifteen years of investigative work, uncovers the CIA's systematic efforts to suppress and censor information over several decades. An award-winning journalist, Angus Mackenzie waged and won a lawsuit against the CIA under the Freedom of Information Act and became a leading expert on questions concerning government censorship and domestic spying. In Secrets, he reveals how federal agencies--including the Department of Defense, the executive branch, and the CIA--have monitored and controlled public access to information. Mackenzie lays bare the behind-the-scenes evolution of a policy of suppression, repression, spying, and harassment.

Secrecy operations originated during the Cold War as the CIA instituted programs of domestic surveillance and agent provocateur activities. As antiwar newspapers flourished, the CIA set up an "underground newspaper" desk devoted, as Mackenzie reports, to various counterintelligence activities--from infiltrating organizations to setting up CIA-front student groups. Mackenzie also tracks the policy of requiring secrecy contracts for all federal employees who have contact with sensitive information, insuring governmental review of all their writings after leaving government employ.

Drawing from government documents and scores of interviews, many of which required intense persistence and investigative guesswork to obtain, and amassing story after story of CIA malfeasance, Mackenzie gives us the best account we have of the government's present security apparatus. This is a must-read book for anyone interested in the inside secrets of government spying, censorship, and the abrogation of First Amendment rights.

Angus Mackenzie (1950-1994), an investigative reporter known for his persistence and independence, was one of the nation's foremost experts on freedom of information laws. Known for crusading journalism in defense of the First Amendment, his work appeared in publications ranging from alternative weeklies to the Washington Post and the Columbia Journalism Review. Mackenzie was affiliated with the Center for Investigative Reporting in San Francisco and taught at the School of Journalism at the University of California, Berkeley. David Weir was a co-founder of the Center for Investigative Reporting, where he managed contracts with "60 Minutes," "20/20," CNN, CBS News, ABC News, and many other outlets. He served as editor and writer at a number of publications, including Rolling Stone, Mother Jones, and the San Francisco Examiner. He has won or shared over two dozen journalism awards, including the National Magazine Award.

"If anything is more corrupting than power, it is power exercised in secret. Angus Mackenzie's magnificently researched, lucidly written study of the CIA's outrageous threats to freedom in America over the years is a summons to vigilance to protect our democratic institutions."--Daniel Schorr

"The late Angus Mackenzie has left an appropriate legacy in Secrets: The CIA's War at Home, a fitting capstone to his long career of exposing government secrecy and manipulation of public information. Secrets is a detailed, fascinating and chilling account of the agency's program of disinformation and concealment of public information against its own citizens."--Ben H. Bagdikian, author of The Media Monopoly

"This courageous, uncompromising book belongs on the bookshelf of every serious student of journalism and the First Amendment."--Tom Goldstein, Dean, Graduate School of Journalism, Columbia University

PROLOGUE: THE CIA AND THE ORIGINS OF THE FREEDOM OF INFORMATION ACT

ONE
CONSERVATIVES WORRY AND THE COVER-UP BEGINS

TWO
YOU EXPOSE US, WE SPY ON YOU

FIVE
CENSOR OTHERS AS YOU WOULD HAVE THEM CENSOR YOU

SIX
DID CONGRESS OUTLAW THIS BOOK?

SEVEN
TRYING TO HUSH THE FUSS

TWELVE
ONE MAN SAYS NO