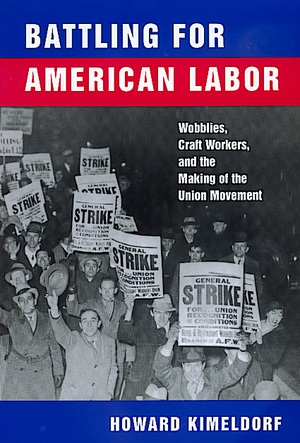 Battling for American Labor Wobblies, Craft Workers, and the Making of the Union Movement

In this incisive reinterpretation of the history of the American labor movement, Howard Kimeldorf challenges received thinking about rank-and-file workers and the character of their unions. Battling for American Labor answers the baffling question of how, while mounting some of the most aggressive challenges to employing classes anywhere in the world, organized labor in the United States has warmly embraced the capitalist system of which they are a part. Rejecting conventional understandings of American unionism, Kimeldorf argues that what has long been the hallmark of organized labor in the United States—its distinctive reliance on worker self-organization and direct economic action—can be seen as a particular kind of syndicalism.

Kimeldorf brings this syndicalism to life through two rich and compelling case studies of unionization efforts by Philadelphia longshoremen and New York City culinary workers during the opening decades of the twentieth century. He shows how these workers, initially affiliated with the radical IWW and later the conservative AFL, pursued a common logic of collective action at the point of production that largely dictated their choice of unions. Elegantly written and deeply engaging, Battling for American Labor offers insights not only into how the American labor movement got to where it is today, but how it might possibly reinvent itself in the years ahead.

Howard Kimeldorf is Professor of Sociology at the University of Michigan and author of Reds or Rackets? The Making of Radical and Conservative Unions on the Waterfront (California, 1988).

"This riveting, nuanced book takes seriously the workplace radicalism of many early twentieth century American workers. The restriction of working class militancy to the workplace, it shows, was no mere economism. Organizational rather than psychological in orientation, Battling For American Labor accounts for both the early preference of dockworkers in Philadelphia and hotel and restaurant workers in New York for the IWW rather than the AFL and for the reversal of this choice in the 1920s. In so doing, it points the way to a fresh reading of American labor history."—Ira Katznelson, Columbia University

"Howard Kimeldorf's book, based on sound and solid historical research in archives, newspapers, journals, memoirs and oral histories, argues that workers in the United States, regardless of their precise union affiliation, harbored syndicalist tendencies which manifested themselves in direct action on the job. Because Kimeldorf's book reinterprets much of the history of the labor movement in the United States, it will surely generate much controversy among scholars and capture the attention of readers."—Melvyn Dubofsky, Binghamton University, SUNY

"Howard Kimeldorf's new book is a very exciting accomplishment. This book will surely leave a major imprint on labor history and the sociology of labor. Kimeldorf's focus on repertoires of collective action and practice instead of ideology is a particularly important contribution; one that will force students of labor to rethink many worn-out arguments. After reading Battling For American Labor, one will no longer be able to assume the IWW's defeat was inevitable, or take seriously psychological theories of worker consciousness."—David Wellman, author of The Union Makes Us Strong