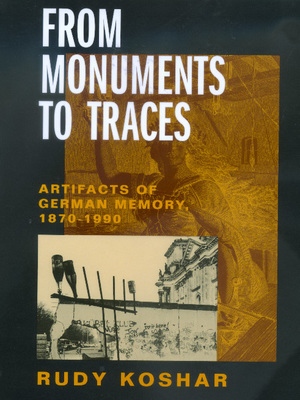 From Monuments to Traces Artifacts of German Memory, 1870-1990

Rudy Koshar constructs a powerful framework in which to examine the subject of German collective memory, which for more than a half century has been shaped by the experience of Nazism, World War II, and the Holocaust. Finding the assumptions of many writers and scholars shortsighted, Koshar surveys the evidence of postwar German memory in the context of previous traditions. From Monuments to Traces follows the evolution of German "memory landscapes" all the way from national unification in 1870-71 through the world wars and political division to reunification in 1990.

The memory landscapes of any society may incorporate monuments, historical buildings, memorials and cemeteries, battlefields, streets, or natural environments that foster shared memories of important events or personalities. They may also be designed to divert public attention from embarrassing or traumatic histories. Koshar argues that in Germany, memory landscapes have taken shape according to four separate paradigms--the national monument, the ruin, the reconstruction, and the trace--which he analyzes in relation to the changing political agendas that have guided them over time. Despite the massive ruptures of Germany's history, we see that significant continuities have served to counterbalance the traumas of the German past.

Rudy Koshar, DAAD Professor of German and European Studies at the University of Wisconsin, Madison, is the author of Germany's Transient Pasts (1998) and two other books.

“In this elegant and provocative study, Rudy Koshar describes the myriad ways in which Germans, over the past 150 years, have sought to memorialize various parts of their history--or to forget them. Koshar's treatment is comprehensive, offering detailed discussions of imperial-era attempts to craft a national history, Weimar's attempts to 'remember' the Great War, the grandiose aspirations of the Nazi era, the East/West memory divide after 1945, and the difficulty of commemorating the intertwined histories of the victims, perpetrators and bystanders in the years after 1970. . . . A synthetic, yet subtle and original, account of the continuities in breaks in German cultural history since 1871.”—Suzanne Marchand, Louisiana State University

“This book marks a turning point in the emerging subfield of studies of memory--not only because of its chronological and geographical range, and the breadth of the primary and secondary source material upon which it draws, but especially because of its analytical incisiveness. With its balance between detailed example and overarching interpretation, this engaging and smoothly written account will appeal to general readers interested in the cultural history of Modern Europe, as well as specialists in German and European history.”—Harold Marcuse, University of California, Santa Barbara