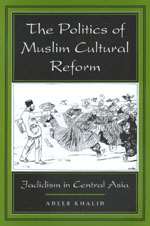 The Politics of Muslim Cultural Reform Jadidism in Central Asia

Adeeb Khalid offers the first extended examination of cultural debates in Central Asia during Russian rule. With the Russian conquest in the 1860s and 1870s the region came into contact with modernity. The Jadids, influential Muslim intellectuals, sought to safeguard the indigenous Islamic culture by adapting it to the modern state. Through education, literacy, use of the press and by maintaining close ties with Islamic intellectuals from the Ottoman empire to India, the Jadids established a place for their traditions not only within the changing culture of their own land but also within the larger modern Islamic world.

Khalid uses previously untapped literary sources from Uzbek and Tajik as well as archival materials from Uzbekistan, Russia, Britain, and France to explore Russia's role as a colonial power and the politics of Islamic reform movements. He shows how Jadid efforts paralleled developments elsewhere in the world and at the same time provides a social history of the Jadid movement. By including a comparative study of Muslim societies, examining indigenous intellectual life under colonialism, and investigating how knowledge was disseminated in the early modern period, The Politics of Muslim Cultural Reform does much to remedy the dearth of scholarship on this important period. Interest in Central Asia is growing as a result of the breakup of the former Soviet Union, and Khalid's book will make an important contribution to current debates over political and cultural autonomy in the region.

Adeeb Khalid is Assistant Professor of History at Carleton College.

"Other scholars have dealt with the Jadid movement, but none approaches this study in the quality of its scholarship and contextual social history."—Dale Eickelman, author of The Middle East and Central Asia

"Original and stimulating . . . with both the empathy of a contemporaneous insider and the critical objectivity of an informed outsider."—John Perry, University of Chicago

I. Knowledge and Society in the Nineteenth Century
2. The Making of a Colonial Society
3. The Origins of Jadidism
4. The Politics of Admonition
5. Knowledge as Salvation
6. Imagining the Nation
7. Navigating the Nation
8. 1917: The Moment of Truth