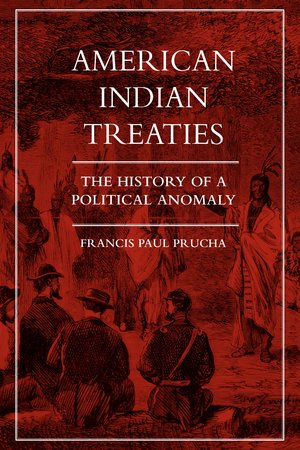 American Indian Treaties The History of a Political Anomaly

Francis Paul Prucha, S.J. (1921-2015) was Professor Emeritus of History at Marquette University. Among his many books is The Indians in American Society: From the Revolutionary War to the Present.

"This is a big book, an important book, sweeping in conception and content. . . . Like Prucha's other works, American Indian Treaties is meticulously researched, well written, and essential reading. It is by intent policy- rather than Indian-centered history."—Journal of American History

"This book will be a standard reference work for the entire profession. . . . an admirable research tool."—Western Historical Quarterly

"By the end of the book, the reader will have a much better understanding of how the policies, resources, and sheer brute force of the federal government manifested in treaties with Native Americans played a central part in the history of 'civilizing' the American 'wilderness.'"—Law and History Review

"For anyone investigating federal Indian policy, this will be an indispensable work. . . . as with any sound historical work, even those who disagree can richly draw on the research. In doing so, they will be aided by a wonderful, old-fashioned innovation that makes the book a joy to engage: footnotes at the bottom of the page. . . . the 130 pages of appendices and notes on sources alone are worth the price."—American Historical Review

"This book should be required reading by people who are interested in federal Indian law . . . Prucha's book is as good a guide as this generation will get. Let us hope that it sparks some enthusiasm for scholarship among Indians."—American Indian Quarterly

"Sources for the study of American Indian treaties will be of great interest to future scholars who pursue this subject. The book will be a valuable reference work for every archive and every college and university library."—Pacific Northwest Quarterly

PART ONE. A TREATY SYSTEM
1
The Revolutionary War Years
2
Treaties of Peace after the Revolution
3
Treaty-Making Procedures under the Constitution
4
Confirming the Procedures: Other Treaties in the 1790s

PART TWO.
INSTRUMENTS OF FEDERAL POLICY
5
Testing the Treaty System: 1800 to the War of 1812
6
A Position of Dominance: The War of 1812 and After
7
Indian Removal and the Debate about Treaty Making
8
The Removal Period in the North
9
Patterns in Treaty Making
10
Treaties in the Expanding West
11
The Civil War Decade

PART THREE. DETERIORATION
12
The End of Treaty Making
13
Treaty Substitutes
14
The Collapse of the Treaty System