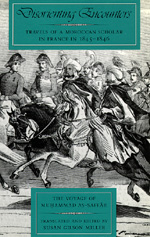 Disorienting Encounters Travels of a Moroccan Scholar in France in 1845-1846. The Voyage of Muhammad As-Saffar

In December of 1845, Muhammad as-Saffar was sent by the reigning Moroccan sultan on a special diplomatic mission to Paris. During the journey, as-Saffar took careful notes and upon his return he hurriedly wrote this travel account.

Why was the sultan, descendent of the Prophet Muhammad, and head of a dynasty that had ruled Morocco for more than two hundred years, so eager to read this account? Perhaps he thought it would illuminate some troubling matters: how the French acquired their power and their mastery over nature; how they led their daily lives, educated their children, treated their women and servants. In short, the sultan wanted to know the condition of French civilization and why it differed from his. As-Saffar provided the answers.

Moreover, as we read the account, Muhammad as-Saffar comes alive for us. We see him reflecting on the beauty of women, contorting during his ritual ablutions, and suffering from boredom at endless dinners. His opinions and ideas infuse every page. For him the journey was more than a catalog of curiosities; it was a transforming experience. Given our very limited knowledge of the time and the absence of other voices that speak with equal clarity, this travel account enlarges our understanding of the relationship between nineteenth-century Morocco and France.

Susan Gilson Miller is Lecturer in History and Director of Moroccan Studies in the Center for Middle Eastern Studies at Harvard University.

I. Introduction
II. The Text