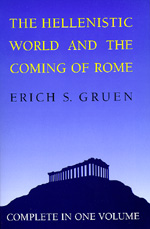 The Hellenistic World and the Coming of Rome

In this revisionist study of Roman imperialism in the Greek world, Gruen considers the Hellenistic context within which Roman expansion took place. The evidence discloses a preponderance of Greek rather than Roman ideas: a noteworthy readiness on the part of Roman policymakers to adjust to Hellenistic practices rather than to impose a system of their own.

Part I: The Instruments of Diplomacy
Part II: Attitudes and Motivation

Part III: The Patterns of Behavior