By Lisa Hajjar, author of The War in Court: Inside the Long Fight against Torture

I made my first trip to Guantánamo in July 2010 after years of researching the fight against US torture during the “war on terror.” At the time, Guantánamo’s well-deserved description as a “legal black hole” felt personal: I could not access a site central to my research, neither as a scholar nor as a concerned citizen. Or so I thought.

Over the previous few years, I had interviewed lawyers who worked at Guantánamo, either civilians who had volunteered to serve as detainees’ habeas counsel or JAGs defending clients facing trial in the military commissions. There were many things my interviewees could not tell me, including details about how their clients had been tortured by US interrogators. They were subject to stringent gag orders that prevented them from revealing facts that would contradict the government’s lies and misrepresentations about “humane treatment.”

In June of 2010, I had lunch with a psychologist who specializes in torture victims. She was working with the defense lawyers representing Omar Khadr, a Canadian citizen who had been captured in Afghanistan in July 2002 when he was fifteen, and then transferred to Guantánamo in October right after his sixteenth birthday. Khadr was the first person the Obama administration put on trial in the military commissions. The pretrial hearings, which had started in April, turned on what evidence the military judge would allow the prosecution to use. The defense’s position was that every self-incriminating statement should be excluded as a product of torture and coercion.

My psychologist friend, who had spent more than 700 hours working with Khadr, was scheduled to testify when the hearings resumed in July. When I expressed frustration that I couldn’t be there to observe the hearing first-hand, she suggested that I could go as a journalist. Genius idea! She put me in touch with Carol Rosenberg, the dean of the Gitmo press corps, and Carol helped me figure out how to apply to be part of the media delegation. This was how I made my first trip to Guantánamo.

I returned to Guantánamo thirteen more times. I was present for the hearings that concluded Khadr’s case with a plea bargain, and many hearings of the 9/11 case. The five 9/11 defendants had all been disappeared and tortured by the CIA for years before their transfer to Guantánamo in 2006. The case against them had started in 2008 during the Bush administration, but it was derailed when all five made the legally impossible offer to plead guilty on the condition that they go directly to execution—martyrdom by military commission. The Obama administration had intended to try the five in federal court, but that was thwarted by right-wing politicians’ histrionics and the Obama White House’s timidity to defend its own plan. The 9/11 case restarted in 2011 when the defendants were re-arraigned in the commissions.

The pretrial hearings in the 9/11 case dragged on year after year as the defense teams fought the prosecution for information about how their clients had been treated in CIA custody. For many hearings, the media delegation had fewer than ten journalists because motion battles over discovery and complex, arcane points of law were not the stuff of headline news.

But I attended as often as I could. Those motion battles helped me to understand that the case was spinning its wheels in the pretrial phase because it was caught between three conflicting sets of interests. On one side, the defense was fighting for access to classified information about what hap­pened to their clients in CIA custody, insisting that pretrial treatment is legally relevant in any criminal case and, in death penalty cases, heightened due process should apply. The prosecution’s interest is the conviction of the accused and the protection of state secrets. They resolutely insisted that this trial is about the defendants’ roles in the crime of 9/11, and that what happened to them afterward was unre­lated to their involvement in these events. In lieu of giving the defense origi­nal CIA material, prosecutors produced summaries and substitutions, which obscured specific dates and locations and mask the identities of people with unique functional identifiers, like “Interrogator 1,” and pseudonyms, like “Dr. Shrek.”

And last, the CIA controls the information the defense sought and the process that guided the prosecution’s preparation of discoverable materials. The CIA has no institutional interest in due process or fair trials, only in maintaining its secrets. As I came to understand, the core problem is not that the CIA’s secrets must be protected in the interest of national security, but rather that the government has prioritized the protection of those secrets over basic tenets of the rule of law and due process in this capital case.

My latest trip to Guantánamo was in January 2020. That hearing was the most momentous because James Mitchell and Bruce Jessen, the private contractors who designed and ran the CIA’s black site program, were there to testify. During questioning by defense attorney James Connell, Mitchell explained his approach to Pavlovian condi­tioning to achieve “learned helplessness.” His assumption—and by extension the CIA’s position on coercive interrogations—was that “actionable intelligence” could only be gleaned from “high value detainees” by attacking their psyches through physical and psychological tactics to produce “debility, disorientation, and dread” which would make them “compliant” during questioning.

These are tidbits of the many stories I tell in The War in Court, which chronicles the legal fight against US torture that was waged across four administrations. The book focuses on the lawyers who battled the government over torture, forced disappearance, and protracted incommunicado detention at Guantánamo, CIA black sites, and military prisons in Afghanistan and Iraq. I explain why hundreds of legal professionals—JAGs and attorneys from the toniest corporate law firms, human rights lawyers and solo practitioners, law professors and their students—were galvanized to defend the rule of law that was upended by the torture policy and enlisted in what turned into a war in court. I trace how they formed alliances and strategized their battles in federal courts and military commissions to try to defend the rights of their clients—prisoners in US custody. I explain the ambitious and justice-minded but ultimately unsuccessful efforts to hold government officials responsible for the crime of torture to account or to provide any redress for victims. Although the subject of this book is grim, the narrative includes moments of hope, heroism, and even some humor.

The fight that I write about is not over. Guantánamo is still open, many aspects of the now-defunct CIA interrogation program remain classified, and the military commissions are still engaged in the legal farce that torture and justice are compatible. But without the individual and collaborative efforts of these lawyers and their allies, there would have been no concerted opposition to torture.

Disability Rights: A Current History Virtual Issue
For Other Growing U.S. Cities, Atlanta is a Warning 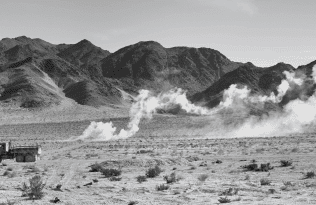