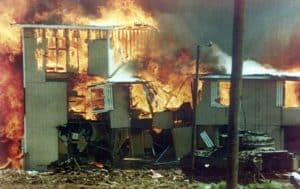 Twenty-five years ago, between 28 February 1993 and 19 April 1993, a conflict on property named Mount Carmel outside Waco, Texas between American federal agents and members of the Branch Davidian community resulted in the largest loss of life in law enforcement actions in the United States. Subsequent to the Mount Carmel conflict, Nova Religio: The Journal of Alternative and Emergent Religions became the journal of record on Branch Davidian history and the events in 1993.

This virtual issue of Nova Religio contains eight articles about the case that FBI agents named WACMUR (Waco Murder) after they took charge of the Mount Carmel property on 1 March 1993. The day before, on 28 February 1993, a shootout had occurred between Bureau of Alcohol, Tobacco, and Firearms (BATF) agents and Branch Davidians as the agents attempted a “no-knock,” “dynamic entry” into the residence to serve warrants, resulting in the deaths of four BATF agents and six Branch Davidians. FBI agents presided over what became a fifty-one-day siege, with agents carrying out a tank and CS gas assault on 19 April 1993 that culminated in a massive fire in which seventy-six Branch Davidians of all ages died.

What was the cause and who bears responsibility for this deadly conflict? How do new sources and revelations uncovered in the last twenty-five years help us understand the situation? What kinds of narratives have been constructed around these events, including, most recently, the Paramount Network fictionalized mini-series titled Waco?

This special virtual issue from Nova Religio investigates the Mount Carmel conflict via eight peer-reviewed articles that are freely available from February 28 – April 30, 2018.

Inside the virtual issue

Deaths in the Fire at the Branch Davidians’ Mount Carmel: Who Bears Responsibility?
Catherine Wessinger (Vol. 13 No. 2, November 2009)

The Use of the Military at Waco: The Danforth Report in Context
Jean E. Rosenfeld (Vol. 5 No. 1, October 2001)

A Decade after Waco: Reassessing Crisis Negotiations at Mount Carmel in Light of New Government Disclosures
Stuart A. Wright ( Vol. 7 No. 2, November 2003)

Why Waco Has Not Gone Away: Critical Incidents and Cultural Trauma
Jayne Seminare Docherty (Vol. 5 No. 1, October 2001)

Celebrate the CESNUR annual conference with Nova Religio: The Journal of Alternative and Emergent Religions